Red Channels: The Report of Communist Influence in Radio and Television 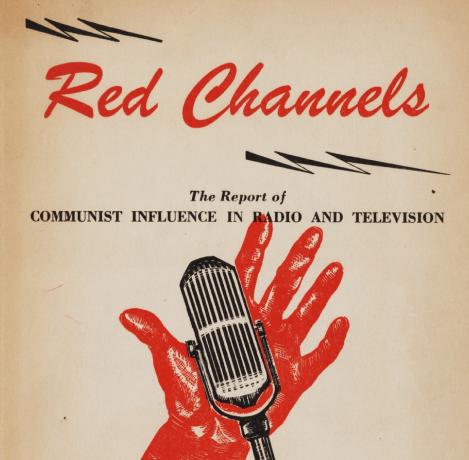 At the end of World War II, anti-communists—including powerful organizations like the Federal Bureau of Investigation, the House Un-American Activities Committee (HUAC), the American Legion, the National Association of Manufacturers, the Catholic Church, Chambers of Commerce around the country, and many other institutions and organizations—initiated an apocalyptic battle over their definition of Americanism. Some of them believed that this war was reality; others were swift to recognize the political and economic utility of frightening people into giving up fundamental rights in exchange for promises of security. Arguing that the ends (stemming what anti-communists depicted as a rising tide of atheistic communism) justified the means (unconstitutional, illegal, and often brutal forms of surveillance and retaliation), anti-communists set out to make sure that the new medium of television would be free of progressive influences and thus challenges to their racial and gender hierarchies and economic dominance.

A group of former FBI agents and military intelligence officers led the charge against progressive influence in broadcasting. Financed by an unusual collaboration between Jewish anti-communist importer Alfred Kohlberg and the Catholic Church, these men established the American Business Consultants in 1947 (the indefinite article before the name emphasizing their sense of self-importance). This organization published the influential anti-communist newsletter CounterAttack (1947-1969) and their self-proclaimed bible of the blacklist, Red Channels: The Report of Communist Influence in Radio and Television (1950). The American Business Consultants also inspired imitators who helped spread the gospel of anti-communism, including AWARE, Inc., founded by the author of Red Channels’ introduction, Vincent J. Hartnett, in league with prominent anti-communist supermarket chain owner Laurence A. Johnson.

The American Business Consultants propagated the idea that communists had infected broadcasting with their subversive virus, with the intent of spreading the disease of dissent to audiences. In his introduction to Red Channels, Harnett wrote, “The Communist-operated escalator system in show business has been in force for at least 12 years—since the Spanish Civil War. Those who are ‘right’ are ‘boosted’ from one job to another, from humble beginnings in Communist-dominated night clubs or small programs that have been ‘colonized,’ to more important programs and finally to stardom.” Anti-communists argued that the “so-called ‘intellectual’ classes—members of the arts, the sciences, and the professions” possessed dangerous, un-American ideas and that they must be prevented from access to the airwaves by any means necessary. Progressive intellectuals (including scientists, artists, and educators), in the estimation of anti-communists, were intent on nothing less than the “increasing domination of American broadcasting and television, preparatory to the day when—the Cominform believes—the Communist Party will assume control of this nation as the result of a final upheaval and civil war.”

The American Business Consultants was in the smear and clear business, meaning that the former agents collected information on progressives in government, business, and media industries; used that information to "prove" their associations with communism; and then sold their services to clear employees. That this was a form of blackmail—in which the American Business Consultants threatened consumer boycotts if advertisers, networks, and sponsors did not agree to terminate employees anti-communists had branded un-American—was clear. But their status as former FBI agents, and the assumed support of the Bureau—made criticism difficult and often dangerous.